With 55.87% of the vote and a high turnout on December 19, the victory of Gabriel Boric, candidate of the Broad Front and the Communist Party in the presidential election, has a double meaning.

First, workers, young people, and women voted massively against Jose Antonio Kast, who claimed the legacy of the military dictatorship of General Augusto Pinochet (1973-1990) and promised to step up the anti-worker policies of the current Piñera administration. Kast promised to “reserve social assistance for married women only” and to increase the repression against the Mapuche indigenous people (10% of the population).

The workers, women and youth also voted so that their legitimate aspirations would finally be met.

When the results were announced, tens of thousands of people took to the streets. “Since the times of our parents and grandparents, we have continued to fight against everything that Kast represents in Chile,” stated a 27-year-old waitress. “I cry with joy. We beat fascism. I’m going to go home and hug my children,” stated an office employee. A construction worker hopes for “many changes that will help the people and the working class, the forgotten ones.” (Agence France Presse, December 20)

The Chilean working people have made it clear: No more military dictatorship. Nor do they want its economic and social policies, which have handed over pensions to private pension funds, sold off copper extraction to foreign multinationals, and privatized all public services.

This is what the youth and workers had expressed on October 18, 2019, when they rose up against the whole institutional system inherited from the dictatorship.[1] They rose up because Chile’s main institutions, its 1980 constitution and all its economic and social policies – all dictated by the financial institutions – have continued for 30 years under the governments of the “Concertation”, with the tacit or open agreement of the Socialist Party and the Communist Party, allied with the Christian Democracy. The “Concertation” candidate, supported by the Socialist Party-Christian Democracy alliance, was defeated in the first round and supported Boric in the second round.

In his first speech, Boric promised “a healthcare system that does not discriminate between rich and poor, as well as pensions worthy of those who have worked all their lives. He promised to solve the drama of housing and lack of access to public services. He promised to strengthen public education, guarantee workers’ rights, “end the patriarchal legacy,” and “create a new relationship with the indigenous peoples.” Referring to the Constituent Convention elected in May 2021, he added, “for the first time in our history, we are writing a democratic constitution.”

In the same speech, however, Boric emphasized the need to “cooperate with the business community, build alliances, bring views together.” He added: “Despite our differences, especially with those of Jose Antonio Kast, we will know how to build bridges between us. In short, he promised “more social rights while remaining fiscally responsible” — that is, respecting Chile’s commitments to financial institutions and debt repayment.

For the Agence France Presse, these are “social promises that will be difficult to keep in the face of a Congress that is not entirely committed to his cause,” especially since “one of the first tasks of the left-wing president, whom his detractors described as a ‘communist,’ will be to reassure the financial markets.” Boric has no majority in the Congress, a corrupt institution that grew out of the 1980 Pinochet constitution.

To break with, or to respect, the institutions inherited from the dictatorship?

The reactions of Chilean capitalists and the United States shed light on the new situation.

The Association of Banks and Financial Institutions asked Boric “to allow the government and the opposition to play their roles … the only way to guarantee certainty and stability, two virtues that have characterized Chile for decades.” For the National Chamber of Commerce, it is necessary to put an end to “the polarization of recent weeks,” because “winners and losers, left and right, we are all compatriots, employers and employees.”

This insistence on forging “national unity” within the framework of the institutions inherited from the Pinochet dictatorship, especially its undemocratic Congress, is echoed by the reactionary ex-President Sebastián Piñera, who warned Boric: “Governments come and go, but the State remains.”

For the powers-that-be, the main task today, as it has been over the past 30 years, is the respect of the institutions… within the framework of which no change favorable to working people is possible.

These views have been echoed by U.S. imperialism, whose Secretary of State, Antony Blinken, “looks forward to continuing to work with Chile to advance our common goals.” The U.S. Chamber of Commerce in Chile “offered its full support and willingness to work with the new government” … provided that the institutions are respected, because as the Wall Street Journal writes, promises of social reforms could “be paralyzed by a divided Congress.”

Conversely, as the Chilean Independent Movement for the Rights of the People stated, “true democracy and the sovereignty of the people require the convening of a Sovereign Constituent Assembly with full powers to carry out a policy in line with the interests of the majority of the people and under their control,” namely, a policy that satisfies “the demands that millions expressed in the mobilizations of October 18, 2019.” —

[1]  On October 18, 2019, the high school students’ protested in huge numbers against the umpteenth 30-peso increase in the price of transportation. It soon turned into an uprising of the entire working class, with the cry of, “It’s not 30 pesos, but 30 years!” 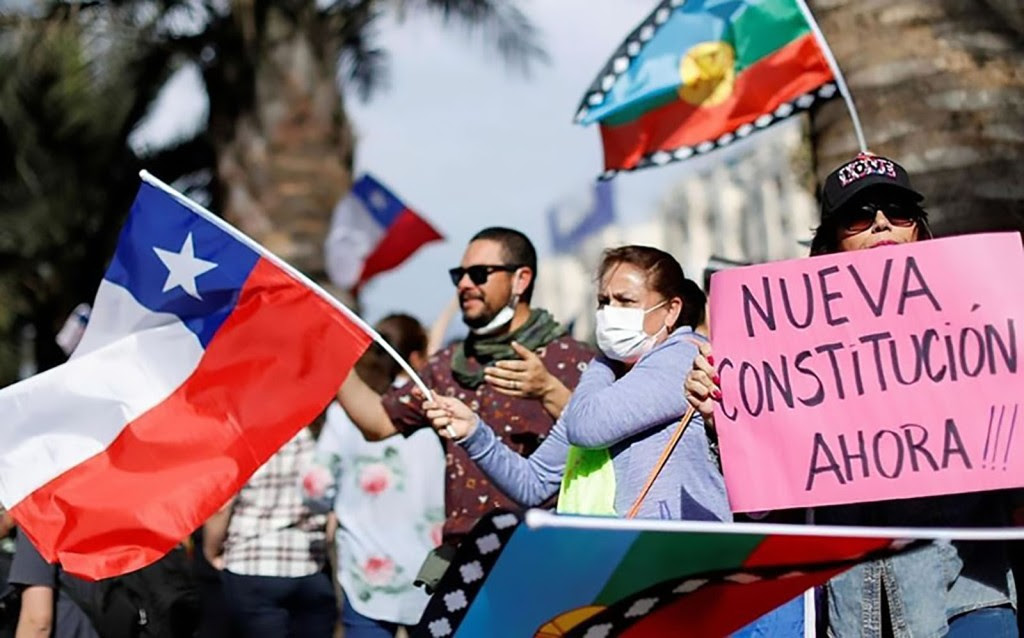 CHILE: The Importance of Boric’s Triumph for the New Constitution

Gabriel Boric was elected president of Chile in the second electoral round on December 19, 2021, with 55.87% of the vote.

With this vote, the workers and youth rejected Jose Antonio Kast, the ultra-right-wing candidate who claimed the legacy of the military dictatorship of General Augusto Pinochet and pledged to deepen the anti-worker policies of the current Piñera administration. The people rejected the privatization of pension funds and public services.

It is worth noting that the Constitutional Convention wasn’t a process that Piñera’s right-wing government accepted lightly. It was the result of the massive protests of late 2019 in Chile. On October 18, 2019, thousands of Chileans went into the streets to protest against the entire institutional system inherited from the dictatorship, a system maintained over the past 30 years.

Boric and the New Constitution

The future of Chile has not been decided yet. While the electoral triumph of the left coalition led by Boric is a step forward, it is important to highlight the fact that Boric is not a socialist, though he has included in his platform some left-wing positions that hopefully will stop the “cannibal capitalism” that Chileans are suffering right now.

The most important conclusion from this electoral result is that the perpetuation of the right-wing in Chile has been stopped. With the new Boric government, it may actually be possible to implement the progressive Constitution that is being drafted at the moment. Most of the Constitutional legislators are left-wing; the President of the Convention is Elisa Loncón, a left-wing Mapuche indigenous woman.

Now is the time to mobilize in greater numbers to press the new government to actually carry out the policies that are needed to meet the demands of the workers and youth, and to adopt a new Constitution that removes all the vestiges of the reactionary Pinochet Constitution. The new Constitution is expected to be completed in mid-2022.