[reprinted from issue no. 250 (July 29) of Tribune des Travailleurs (Workers Tribune). the weekly newspaper of the Democratic Independent Workers Party (POID) of France]

Not a day goes by without a new measure marking the intensification of the all-out offensive by U.S. imperialism against China. The latest news on this front is the closing of the Consulate of the People’s Republic of China in Houston. It may seem symbolic, but it is the first of its kind since diplomatic relations were re-established between the United States and China after the 1949 Revolution.

This is all part of a package that includes the escalation of a genuine trade war, the denunciation of the Chinese government as “deliberately responsible for the outbreak of the pandemic,” and the threat to reinforce the powerful U.S. military forces in the South China Sea.

It is not just Trump’s vengeful statements and actions, however. Sectors of the U.S. bourgeoisie have been most critical of Trump — as expressed, for example, in the July 24 issue of the Washington Post. The newspaper’s editorial criticizes Trump’s “weakness in relations with China” and insists on the need “for the U.S. to lead the world’s democratic nations in resisting China’s worsening totalitarian rule and bellicose posture.”

Not about to be outflanked on this issue, Mike Pompeo, Trump’s Secretary of State, embarked on a tour in which he called for a “coalition” against China, because, he explained, “it is no longer realistic to ignore the fundamental differences between our two systems that today make China the greatest threat of our time.”

What is underway is a global offensive corresponding to the needs of U.S. imperialism in the current global crisis — a situation that no longer allows the kind of relations that existed before with the Chinese bureaucracy to continue. 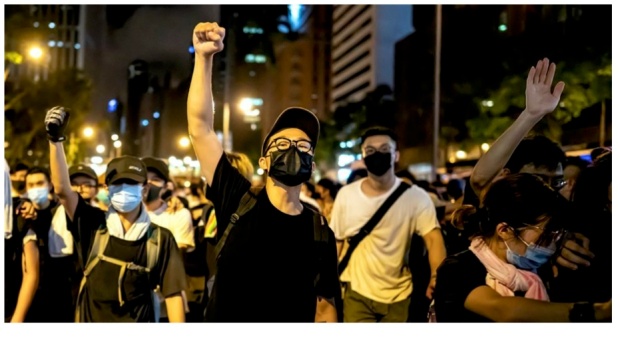 A Damaging Blow Against Working People Throughout China

[Published in Issue no. 248 (July 15, 2020) of La Tribune des Travailleurs (Workers Tribune], the weekly newspaper of the French POID]

The Beijing government has just enacted a “Law on Safeguarding National Security” that applies to the territory of Hong Kong. The law targets the crimes of “secession, subversion, organization and perpetration of terrorist activities, and collusion with a foreign country or with external elements.” These crimes can be punished with prison sentences of up to life imprisonment. None of the offenses are clearly defined. To put it plainly, any expression of opposition to the current government can be classified under one of these headings.

Despite the COVID-19 epidemic and a ban on protests, as soon as the new law came into force on July 1, Hong Kong witnessed powerful demonstrations and protests. They resulted in 370 arrests: hundreds of people were detained under the new law for carrying placards.

Given its population and its history, Hong Kong is indisputably Chinese territory. Although this territory with some 7.5 million inhabitants is a Special Administrative Region under the current Constitution of the People’s Republic of China, the fact is that Hong Kong was snatched from China by British imperialism during the Opium Wars and remained a British colony from 1842 to 1997. The struggle against British rule In Hong Kong was very much part of the struggle of the whole Chinese people, as demonstrated by the 1925 general strike.

The “handing back” of Hong Kong to China in 1997 was done on the basis of an agreement between the British government and the Chinese bureaucracy that completely preserved the capitalist system in Hong Kong. This is referred to as the status of “one country, two systems,” which has made Hong Kong the world’s third biggest financial centre and the main hub for relations between imperialism and China’s governing bureaucracy.

In this context, the workers fighting against capitalist exploitation have used the limited political rights granted to Hong Kong to their advantage, forming their own independent organizations, their trade unions, and their union confederation.

Over the last year, the labor movement has played a crucial role within the movement against the extradition bill. It is significant that 91 new trade unions have been set up during this period, very often in the middle of strike action. It is the working class first and foremost that today is the target of the attacks launched under the new law. The existence of independent trade union organizations in Hong Kong is a leverage point for the workers of the whole of China as they take action to assert their right to organize, to strike, and to protest.

Several commentators have affirmed that the Chinese government has just delivered a fatal blow to the status of “one country, two systems.” Nothing of the sort: the Chinese authorities have reaffirmed their commitment to the free movement of capital in Hong Kong and their respect for private ownership. Big capitalist institutions like HSBC Bank and the Chinese General Chamber of Commerce have publicly supported the new National Security Law, seeing it as a source of stability.

Meanwhile, the various imperialisms — especially U.S. imperialism – fully intend to seize the opportunity to further increase their political, economic, and military pressure on China. We know that it is always with grand statements about democracy that U.S. leaders launch their wars and interventions against sovereign nations.

Contrary to its proclamations, the bureaucracy’s government has just delivered a blow against the unity of China, against the unity of the Chinese people and workers. Just before enacting the National Security Law, the government banned – for the first time in decades – demonstrations in Hong Kong to commemorate the Tiananmen Square Massacre in June 1989, when the bureaucracy’s government bloodily repressed the huge popular movement that had risen up “for democracy, for freedoms.” The uprising targeted the regime and the social consequences of the policy of opening China up to the multinationals that had been initiated in 1978.

In 1989, the working class stood up against the corrupt bureaucrats. Autonomous working-class organizations were born throughout China, including Hong Kong (which was still a British colony). What marked those demonstrations was the unity of Hong Kong’s workers with the workers of the whole of China. This is also what the new repressive law has sought to prevent.

An official in charge of security in Hong Kong has been appointed as part of implementing the new law. He is Zheng Yanxiong, who rose up through the Chinese Communist Party hierarchy after putting down the revolt by the inhabitants of the village of Wukan in 2011. They had risen up against the plundering of their lands and the local officials’ corruption, and had successfully held elections to choose their own municipal council.

This example is a good illustration of the fact that above all it is fear of seeing working people make use of democratic means that explains the violence of the measures taken by the governing bureaucracy. These measures are a blow against the whole of China’s working population, they are a blow against the unity of the Chinese people, and they can only serve the needs of imperialism.