“Thinning Out the Herd”: Austerity Kills

Editorial and Workplace News reprinted from Issue No. 5 (March 2020) of Labour Internationalist

As the Covid-19 virus gets a grip on the UK and countries around the world, and its economic and political ramifications evolve from one day to the next, it is clear that we are facing a global disaster that will result in deaths counted in the tens of thousands, hundreds of thousands, or even millions.

But, as a question mark is raised over the future of humankind, we have the right to ask: who is responsible for its rapid spread around the world?

For us, the answer is simple: capitalism. The bankruptcy of the capitalist system based on private ownership of the means of production is expressed strikingly in the prioritisation of pharmaceutical profits over basic research that could have provided insights into the spread of Covid-19.

It is expressed in the commodification of people’s health and the prioritisation of building healthcare markets over ensuring that timely and effective healthcare can be accessed by all as a basic right. It is expressed in the deliberate underfunding of public healthcare systems and forced privatisation of services that has resulted in underequipped and overstretched hospitals that can barely meet demand in normal times, never mind in a major health crisis. It is expressed in the permanent attack on social care, with local councils being pushed by government to rely on private care service providers. And especially today, it is expressed in the refusal to make the necessary timely choices on the production and distribution of basic material and equipment for protecting the population.

The systemic failure of healthcare provision is the responsibility of governments of every political stripe – both Tory and Labour – which, especially since the Blair government, have followed the orders of the IMF, the World Bank, the European Central Bank and the European Commission, by enforcing the rules of the “market economy”.

In the UK, recently published data prove that the social impact of 10 years of budget restrictions, slashed public services and austerity driven by the European Union includes a lower life expectancy for poorer people around the country. Chancellor Rishi Sunak’s “Coronavirus Budget” allocated just £5 billion in emergency funding to the NHS, but the NHS was deprived of an estimated £125 billion in underfunding in the previous 10 years. And now, with the Covid-19 crisis, the gaps and shortfalls in the NHS caused by austerity are being exposed even more sharply, and are becoming even more brutal. Today, we do not have enough testing kits or people to do the tests, we have practically no spare ICU capacity in terms of beds, equipment or trained staff, and not even enough masks, sanitisers and other protective equipment for our frontline NHS and social care staff.

And if the virus’s evolution in the UK echoes what is already happening in Italy, within a few weeks doctors in an overwhelmed NHS will have to decide which patients will receive treatment and which will be left to die.

The Johnson government’s initial response to the crisis (for at least one month) was to ignore the views of epidemiologists and immunologists around the world who were calling for urgent practical measures to limit and confront Covid-19. Instead, it chose a strategy based on the theory of “herd immunity”, which means survival of the fittest: let the virus work its way through the population, who will gradually build up immunity, and if hundreds of thousands of older and weaker citizens die, well tough luck.

In other words, a theory which is reminiscent of a eugenics approach, which harks back to a dark period in world history.

A briefing document by the government agency Public Health England, which was kept secret by the government but then leaked last week, says that: “As many as 80% of the population are expected to be infected with Covid-19 in the next 12 months, and up to 15% (7.9 million people) may require hospitalisation.” The document projects a death-toll as high as 531,100.

This attitude of “let it thin out the herd” is the ultimate expression of the bankruptcy of the capitalist system: let the older and weaker citizens die, which ultimately will lighten the burden on the NHS and the pensions system.

The emergency financial measures being announced by the government exclude the poorer members of society – especially workers in various forms of insecure work – at a time when the capitalist class is already using the crisis to cut jobs and shift its impact onto the workers’ backs. For example, Vauxhall’s UK factories in Ellesmere Port and in Luton are to close until 27 March as part of a Europe-wide shutdown by owner PSA Group due to Covid-19, and Nissan has suspended production at its Sunderland plant.

The government and the bosses will use the pandemic to hit the working class even harder. And to do so they will resort to the “national unity” argument. The fight to save lives is of course a priority. But this is why the labour movement must fight for the solutions it needs, even if these are antagonistic to the needs of capital.

Those at the top leadership of the labour movement who a few months ago opposed the will of the majority of the working class and sided with the Remainers will now support calls for national unity, refusing to break with the capitalists and their government that bears responsibility for the current situation.

This is the meaning of the TUC leadership’s call for an emergency Covid-19 taskforce with unions and business, as well as the statement by UNISON’s General Secretary that “Government, businesses and unions all need to work together to get the country through the next few difficult weeks and months.”

Although the working class is being hit hard, it is still fighting back.

For example, postal workers in several depots in London have taken strike action over inadequate protection against Covid-19, while CWU members have voted 94.5 percent in favour of all-out strike action against the Royal Mail’s changes to working practices.

The GMB has rightly demanded that the government uses emergency powers to requisition private health services, rather than – for example – paying companies like Virgin Care £2.4 million per day for the use of private hospital beds.

The British Airline Pilots Association (BALPA) is saying the government must act immediately to support the UK airline industry, which is feeling the pressure of the impact of Covid-19. Unite Assistant General Secretary Diana Holland said (15 March): “The aviation industry employs hundreds of thousands of workers and they are all looking at the government for immediate help, to ensure they will still have jobs in the future. Ministers must not, however, write a blank cheque for irresponsible magnates to line their pockets or squirrel away offshore.”

As long as the capitalist system survives, the working class will always have to fight to defend its rights and particular interests as a class. And to do so, its organisations must reject all attempts to co-opt it into “national unity” initiatives.

Emergency measures are needed: a ban on all job-cuts; maintaining wage levels; full coverage for all sick leave and enforced absence from work; allocation of all necessary funding for the NHS; requisition of private health facilities and services. Also, a return to a fully public NHS, and nationalisation of British Airways. But this will not come out of the blue, it will not be achieved through an “agreement” with the Tory government and the capitalists!

It can only result from the struggle of the workers and their trade unions to impose these measures.

The money is there. What we need is a government that releases these funds and allocates them to the vast majority of the population and not to big business. Now is not the time to pause in raising our demands, in the name of “national unity” around the government. Now is the time for the workers to step up the struggle for their demands. More than ever, the answer lies in the total independence of the workers’ organisations.

What kind of government will implement the measures needed by the working class? Only a government that breaks with the diktats of the capitalist system. The current situation in the NHS is the result of many years of restrictions on public spending imposed by the EU and applied by governments carrying out its orders. The Johnson government is continuing to apply the EU’s policies outside of the EU.

Only such a government will be able to do all this, because it will have the support of the majority of the population: those who can only live by selling their labour.

Capitalists Are Using the Epidemic to Strike Even Harder

There are more than 1 million gig workers in Britain who typically have no rights to SSP and are only paid per job because they are treated as self-employed contractors.

DPD, whose 5,000 couriers deliver parcels for brands including Marks & Spencer and John Lewis, is offering self-employed couriers who need to self-isolate the equivalent of statutory sick pay (£94.25 a week). It is well short of the approximately £550 its drivers with worker status are supposed to earn weekly. DPD has also said costs of renting equipment and vans will not be waived but deferred.

Hermes, which has around 15,000 self-employed parcel couriers, will only pay £20 a day to drivers if they need to self-isolate and only if they typically earn less than £90 a day. This means that almost half its workers will receive nothing and those who do will see payments capped at £280, because they are effectively limited to 14 days.

Deliveroo, the takeaway delivery firm, says it will offer its 35,000 riders in statutory sick pay (SSP), for up to two weeks of self-isolation if they have certifiably contracted the virus, been placed in quarantine by a medical authority or chosen to self- isolate following medical advice. But it did not specify how much higher the payments would be.

The GMB trade union said it was irresponsible that companies which use the gig economy model “put courier safety and public health at risk by creating disincentives to self- isolation”.

UK airline Flybe has collapsed with the loss of 2,000 jobs. The GMB has warned of the “domino” effect, revealing that a further 1,400 jobs in the supply chain are threatened.

Already, thousands of UK steel workers and a large number of auto workers have lost their jobs. Jaguar Land Rover (JLR) is to shut its Halewood plant in Merseyside, which employs just under 4,000 people, for nine days from 19 March. In January, JLR, which is owned by India’s Tata Motors, announced the end of the night shift in Halewood, putting 500 jobs at risk. Halewood and Solihull will also close for a week at Easter and a week at the end of May for Whitsun, in regular holidays that were scheduled in November.

JLR is also “adjusting the production schedule at its Castle Bromwich and Solihull plants”.

Barclays bank is closing a major processing centre in Leeds, with nearly 800 jobs lost. Barclays also announced a further 345 staff cut across the country, including 157 jobs cut in Coventry. 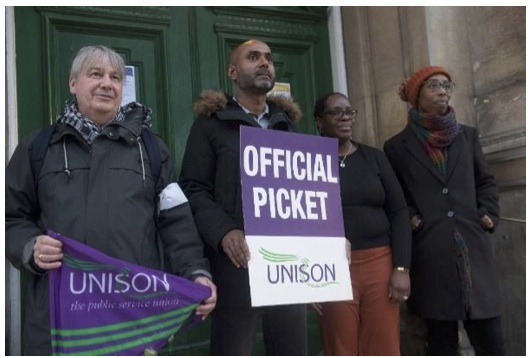 News from the picket line

Bin collections in some areas of Glasgow were suspended last week, after refuse workers staged a sit-in because they had no access to hand sanitiser or hot water at their depot. Workers at the Polmadie depot refused to work on Thursday of last week, leaving parts of the south east of the city without collections.

Workers at SOAS, University of London, won key demands after they threatened to walk out unless bosses agreed to close the site. It follows a student being diagnosed with Covid-19.

Cleaning, portering and catering workers at Lewisham Hospital in southeast London, where some Covid-19 cases have been treated, walked off the job on 12 March in fury at unpaid wages. Around 30 workers struck unofficially after finding out that private subcontractor ISS had failed to pay the wages of the hospital workers.