CGT-FO and CGT quit the funding conference; It now falls to them to call a united general strike for withdrawal of the pension counter-reform

As soon as it was announced that the government would resort to Article 49.3, [1] there were spontaneous rallies and gatherings in the Place de la Concorde in Paris and many places elsewhere in the country. Yesterday (Monday), several thousand people participated in rallies and demonstrations. Then, there were mass meetings and other meetings called in workplaces and localities, where one demand was raised again and again: the government must be stopped.

This demand was taken up this morning in a joint public statement by the trade union organisations of the Val-de-Marne département (south-east of Paris), which “consider that the response to this new slap in the face by the government must be national and inter-professional”, in particular taking the form of “a total shutdown of the country and the economy, which can only happen through a general strike”.

Shutting down the country and a general strike pose the question of the responsibility of the union confederations.

The statement issued yesterday by the confederations’ inter-union body – which called for more local action and a joint day of action on 31 March – surprised many activists, for whom the exceptional breadth and scope of the government’s latest attack calls for a response that is appropriate to the task.

Since then, the Confederal Bureau of CGT-Force Ouvriere published a statement yesterday which responded to the Prime Minister’s blackmail by announcing the confederation’s decision to quit the funding conference [2] and to invite the other union organisations to do the same. This morning, the CGT union confederation followed suit and announced its decision to take no further part in the funding conference.

This is a step in the right direction, the path of rejecting the corporatist integration into which the government would like to force the unions. An important first step. But just withdrawing from the funding conference will not in itself enable the counter-reform to be stopped.

This first step calls for another one: a united call by the union confederations to organise a general strike and the complete shutdown of the country.

This is indeed the question posed today by and in the mobilisations and mass meetings.

(1) Translator’s note: The Macron-Philippe government has repeatedly used Article 49.3 of the Constitution introduced in 1958 under the Bonapartist Fifth Republic to force through legislation which probably would not have been approved by Parliament. Article 49.3 allows the Prime Minister to “commit the government’s responsibility to the National Assembly on the passing of a bill” without a vote. The bill is deemed to be carried, unless a motion of no confidence in the government is tabled within 24 hours by the opposition in the National Assembly and then passed.

(2) Translator’s note: The Macron-Philippe government has convened a conference to prepare its pensions reform, ostensibly to consult on how its new universal points-based pension system would be funded. In practice, this move is just another element in its attempt to co-opt the union organisations into “co-designing” the pensions counter-reform. 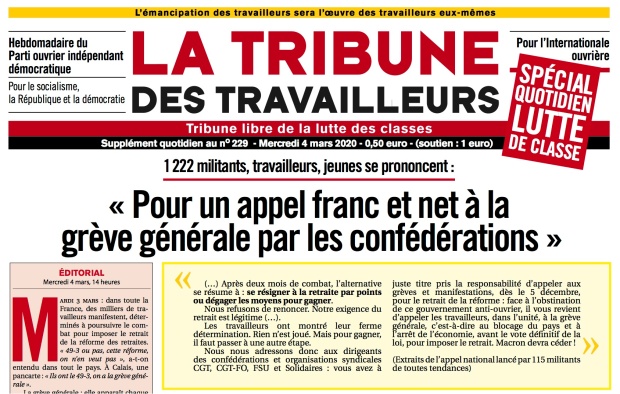 Two Reasons Rather Than One

The more the coronavirus crisis grows, the more pressing the question gets: Can we trust this government? Macron, [Prime Minister] Philippe, [Health Minister] Véran and all the others are assuring us that the crisis is very serious but our hospital system can cope with it.

How could it? When the hospital crisis is huge; when since it came to power, this government has remained deaf to the demands of the doctors, healthcare staff and ancillary staff, and has continued to close beds and units by the thousands; how can it claim to be capable of protecting the population?

This government of liars says one thing one day, then the opposite the next day. It bans some demonstrations and then authorises others that are even bigger, shuts down one public space that can hold 5,000 people and leaves open a museum that receives 30,000 people through its doors every day.

This government of tricksters is arousing distrust and legitimate rejection of it.

Faced with the coronavirus, emergency measures to protect the population could only be determined by bodies that are independent of the capitalist class and the government that serves its interests. Only such independent commissions, composed of doctors, healthcare staff, scientists and representatives of the labour organisations, and having every means at their disposal to carry out the task, will be capable of telling the truth to the public, the truth on the scope and scale of the threat, and the measures to be taken. Only a government that is independent of the bankers’ and speculators’ power will dare to take such measures – including financial ones – to protect the population.

Let us say it clearly: The Macron government will never do this.

This is why there is an urgent need to get rid of it, together with the Fifth Republic.

This urgent need is in addition to one other, which has been put on the agenda by the coup d’état that is the government’s use of Article 49.3. (1) As we know, the capitalist class tolerates democracy as long as it does not get in the way of its thirst for profits. When this is no longer the case, the capitalist class forces things through. It was to meet this need that the Fifth Republic was established in 1958, as a “permanent coup d’état” regime resulting from a military coup d’état. The fact that Macron has resorted to Article 49.3 in order to smash the existing public pension schemes is contrary to democracy, but in line with the Constitution.

There is only one conclusion that we can draw from this: for this double reason, Macron must be driven from power.

It is the most economical way of protecting and the main gain won through struggle in 1945: the Social Security system, of which our public pensions schemes are part.

It is the most economical way of ensuring that the emergency measures dictated by the situation are actually taken: the immediate re-opening of hundreds of hospital units, the re-hiring of thousands of hospital staff, the mass distribution of testing kits and other measures for protecting the population.

1,222 activists, Workers and Youth Declare: “For a clear-cut call by the union confederations for a general strike”

Tuesday, 3 March: Throughout France, thousands of workers were demonstrating, determined to continue the fight to impose the withdrawal of the pensions reform. The cry “49.3 or not, we don’t want this reform” (1) could be heard throughout the country. In Calais, one placard said: “They have 49.3, we have the general strike”.

General strike: More and more each day, this appears as the only perspective that can rally together the strength of millions in order to win. “We need to build the general strike. If we really bring the country to a halt, we win”, stated the spokesperson of one of the unions that organised the demonstration in Laval (Mayenne), as quoted by [daily newspaper] Ouest-France.

Tuesday, 3 March: In a joint statement, the primary school teachers’ unions SNUDI-FO and SNUipp-FSU of the Seine-et-Marne département [east of the Paris region], underlined “the need to call a general strike to bring the economy to a halt, to bring the country to a halt” and called “on the union federations and confederations that, since 5 December, have been calling for withdrawal” to organise the general strike.

Tuesday, 3 March: Speaking in the National Assembly, [France Unbowed leader] Jean-Luc Melenchon ended his speech addressed to the government by reaffirming that “the objective is still withdrawal”, but if this objective is not achieved, “well then, in 2022, we will repeal everything”. (2)

Now is the time, right now, that withdrawal can be imposed. The means for this is already known. It is what 4,000 workers and activists are saying, more than 1,200 of whom are willing to say so publicly.

(1) The Macron-Philippe government has repeatedly used Article 49.3 of the Constitution introduced in 1958 under the Bonapartist Fifth Republic to force through legislation which probably would not have been approved by Parliament. Article 49.3 allows the Prime Minister to “commit the government’s responsibility to the National Assembly on the passing of a bill” without a vote. The bill is deemed to be carried, unless a motion of no confidence in the government is tabled within 24 hours by the opposition in the National Assembly and then passed.

(2) The next presidential elections are due to take place in 2022.