Sewage workers on strike: “We Are a Working Class Battalion. This is Class Struggle!”

In an article about the strikes in France, The Washington Post’s Paris correspondent wrote that although the situation seems to “gradually [be returning] to normal, the (…) President cannot quite be seen as the victor, and neither can the unions be said to have failed.” Because “in a highly uneasy environment, the confrontation between an increasingly isolated Elysee Palace and the streets continues, but in different forms”. (1)

That’s a fact: it is not over. But on which battleground should the struggle continue? On 3 February, [Communist Party newspaper] L’Humanité referred to “the left in battle order in the National Assembly”, where “a new front will be opened”. The workers know from experience that under the Fifth Republic, the National Assembly is more like a fairground shooting gallery than a battleground. In the Assembly, everybody fires blanks that never cause casualties, because the winners are known in advance: the President of the Republic and the capitalist class whose interests he champions.

However much L’Humanité sings the praises of the “work-to-rule” being prepared by France Unbowed with its 20,000 amendments, one of France Unbowed’s spokespersons, Adrien Quatennens, has put it more realistically: “We haven’t come up with anything better.” In the same newspaper, while CP member of parliament Pierre Dharréville announced: “We will try to block, to foil the government’s executive orders” (2), L’Humanité itself damped down the rhetoric: “It will not be easy for an opposition within the framework of a National Assembly whose powers are continuously being weakened to the benefit of the executive.” Continuously weakened? Non-existent, more like it. However much the same Dharréville explains that “we will use very tool at our disposal in the parliamentary debate”, everyone knows that censure motions and amendments are totally incapable of blocking Macron.

Furthermore, L’Humanité should acknowledge the fact that “on the strike picket lines, activists do not regard the extension of the fight to the National Assembly with boundless enthusiasm”. And regarding the parliamentary “battle”, we can quote one CGT union representative in the RATP (3) for whom “there are no false hopes being expressed in the delegate meetings”. As far as that union delegate is concerned: “One thing is for sure, on the picket lines people will not content themselves with organising days of action once a week.”

The Washington Post is right: the government is increasingly isolated. The working class has the capacity to force Macron and the government to retreat – not in the Fifth Republic’s rump assembly, but on its own battleground: the class struggle. This is the view of the 115 labour and youth activists of all political tendencies who are calling on the leaders of the trade union confederations to issue the call – before the vote in the National Assembly – to bring the country and the economy to a halt. In short: to organise a general strike that will make Macron concede.

(1) James McAuley, “The strikes in France are drawing to a close. But there’s no real winner”, The Washington Post, 2 February 2020.

(2) Translator’s note: An ordonnance (ordinance, or executive order) is a statute passed by the Council of Ministers in an area of law normally reserved for statute law passed by the French Parliament. 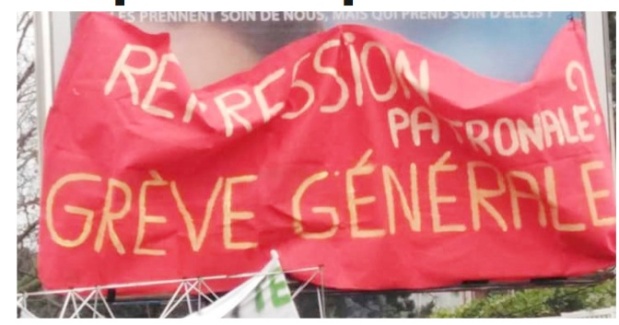 For two months, we have been engaged in a powerful movement of strike action and protest marches which, throughout the country, in both the public and private sectors, in the RATP and SNCF (1), in the oil refineries, in public education, the Paris Opera, Radio France, involving lawyers, students, and many others, is raising one common demand: the withdrawal of the Macron-Philippe reform to introduce a universal points-based pension system.

For two months, millions of people have repeatedly taken strike action and held protest marches. For two months, the government has refused to listen to the demand being made by the strikers and protest marchers, by wage-earners supported by a large majority of the population. What is more, the government has not hesitated to unleash police repression.

On 24 January, the Council of Ministers ratified the pensions bill. The final vote on the bill, currently in its second reading after shuttling between the National Assembly and the Senate, with the threat of Article 49-3 being used, is being planned for April or May. (2)

In the mass meetings and delegate meetings, in our workplaces, in the governing bodies of our trade union organisations, a discussion is taking place: the government has not given in, what do we need to do get the bill withdrawn? Very many motions, resolutions and statements are declaring publicly for a clear-cut call for a general strike by the trade union confederations and organisations that are fighting for withdrawal of the pensions reform.

After two months of struggle, the choice boils down to: either resign ourselves to a points-based pension system, or come up with the means to win.

We refuse to give up. Our demand for withdrawal of the bill is legitimate. And spare us the talk of a general strike opening up a crisis situation: there is already a crisis, provoked by the government’s stubborn determination to oppose the majority and to oppose democracy. The pensions reform must be withdrawn, full stop!

The workers have demonstrated their firm determination. Everything is still to play for. But in order to win, we need to move to another level.

We are therefore addressing the leaders of the CGT, CGT-Force Ouvriere, FSU and Solidaires trade union confederations and organisations: since 5 December 2019, you have rightly taken on the responsibility of calling for strike action and protest marches for the withdrawal of the pensions reform. Faced with this anti-working-class government’s obstinacy, it falls to you to call on the workers to come out on a united basis in a general strike, in other words to bring the country and the economy to a halt, before the final vote on the pensions bill, in order to impose its withdrawal. Macron will have to concede!

We call on all workers who share this demand to endorse this appeal, to meet and to mandate their delegates to the 5th Unity Conference for the withdrawal of the pensions reform, which will take place from 1 to 5 pm on Saturday, 28 March 2020.

(2) Translator’s note: The Macron-Philippe government has repeatedly used Article 49.3 of the Constitution introduced in 1958 under the Bonapartist Fifth Republic to force through legislation which probably would not have been approved by Parliament. Article 49.3 allows the Prime Minister to “commit the government’s responsibility to the National Assembly on the passing of a bill” without a vote. The bill is deemed to be carried, unless a motion of no confidence in the government is tabled within 24 hours by the opposition in the National Assembly and then passed. 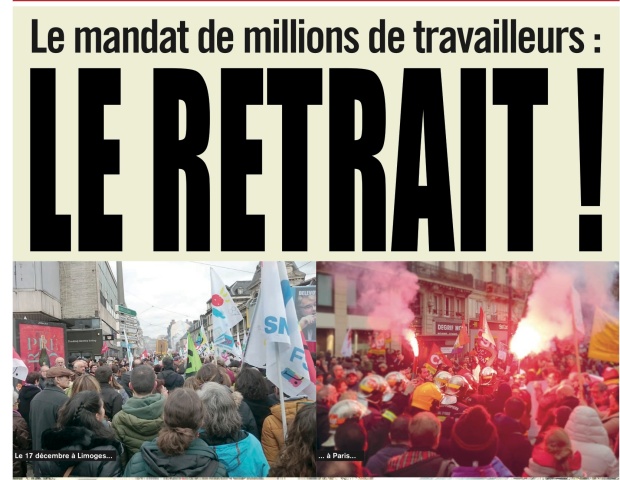 “The Mandate of Millions of Workers: Withdraw the Pension ‘Reform’ Plan!”

This issue of our newspaper is going to press three days before the strikes and demonstrations on 24 January for the withdrawal of the Macron-Philippe bill against workers’ pensions. Undoubtedly, very many workers will mobilise. Because rage against the government continues to grow.

Rage that is being fed by the pensions bill, which is rightly perceived as a machine for reducing the workers to poverty and swelling the capitalists’ profits.

Rage in the face of the hypocrisy of a government that dares to present as progress for women measures that condemn them to more job insecurity, more poverty and more inequality compared to men, and more economic dependence.

Rage against a government and a President which, in the Bonapartist tradition of the Fifth Republic, are trying to impose their plan for destruction by unleashing brutal repression as a normal response to the millions upon millions of people who are standing up against it.

Yes, rage will again be expressed on 24 January. But with one difference compared to previous days of action: financially strangled after 45 days of strike action, most railworkers and RATP (1) staff have gone back to work. “We will be there in even greater numbers on the 24th, because everybody wants to fight, everybody wants it to happen”, one railworker correspondent reports, adding: “After 45 days, we didn’t have a choice other than going back to work, but we are already talking about relaunching the movement. Nobody wants any more [single] days of action. The need for a general strike called by the trade union confederations on a united basis is the focus of the discussions.” In the RATP, one staff member explains: “For 45 days, we called for a general strike, but our call was not answered.” In one secondary school in the Gironde department [in south-west France], where a united mobilisation of teachers and their trade unions has blocked the implementation of the continuous assessment baccalaureate (2), the unions are calling for action on the 24th while pointing out: “We are facing an intransigent government that is pushing for confrontation. There is no alternative to using the balance of power. The leaderships of the trade union organisations must call a general strike to bring the country to a halt. We stand ready.”

Right now, this issue is at the heart of the discussions among the workers, in mass meetings and other meetings. It is a serious issue. Here and there, pessimists who are always happy to say “I told you so” are acting as if they are offended. According to them, it would be inappropriate for workers who have been on strike for 45 days to declare publicly in favour of a clear-cut call for a general strike being issued by the trade union confederations that have called strike action since 5 December.

But isn’t it entirely logical for the working class, which over the course of an age-old struggle has built organisations for defending itself and fighting back, to give its opinion on what those organisations should do in order to win?

Whether or not one agrees with this position, working-class democracy recognises the workers’ right to debate it. Just as democracy imposes on the organisations’ leaderships the duty to respond to it.

(2) Translator’s note: On 20 January 2020, the first exams under the new continuous assessment test system [épreuves communes de contrôle continu, or E3C], introduced as part of the Blanquer counter-reform of the baccalaureate qualification, were boycotted by thousands of teachers across France.