On 17 December, even more than on 5 December: Millions on strike and on demonstrations say: “Withdrawal!”

A million and a half? More? There are plenty of demonstrators and strikers today, 17 December. The strike action is strong and often extended. [Prime Minister] Edouard Philippe can always say that he has faith in the meetings that are scheduled with the trade unions, but he and Macron are far from being done with the demand for withdrawal being shouted by millions of people. For confirmation of this, one need look no further than this reply sent by a RATP (1) employee to the letter which he and his 42,000 colleagues have received from the company management (excerpts). 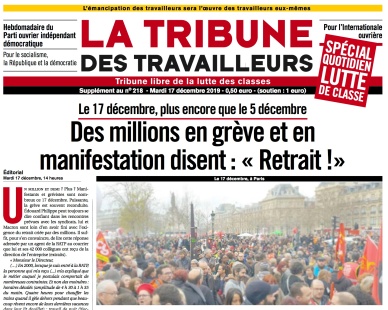 (…) In 2000, when I went to RATP [for a job interview], the person who received me (…) explained to me that the job I was applying for had many limitations. And not minor ones, either: staggered working hours (starts ranging from 4.30 to 1.35 in the morning. Four hours to heat up the trains when it is freezing outside and most people are still tucked up in their warm beds, dreaming about their last holiday); night work (Noctilien night bus, work train…); staggered shifts (going to bed at 3 in the morning and getting up at bedtime when returning to work after rest days); staggered rest days with weekend work (while my friends are getting together for a drink); vacation leave that doesn’t match up with my partner’s; working on public holidays (while others are having fun); sleeping at the bus depot in order to be sure to be one of the first five people to apply for leave on 24 December; working on Christmas Day while the kids are opening their presents (except for this year, because I am still on strike despite your letter).

After all these limitations were laid out, I was unsure whether to get up and leave, but the person explained to me that there were worthwhile compensation measures: a pension calculated on the final 6 months’ salary; a one-fifth pension enhancement; the possibility of retiring at 50 after 25 years of service (WITHOUT reduction).

(…) Now, today and after three reforms in a row, the limitations are still there, and even getting worse, with working conditions having got so much worse on a daily basis; but as for the compensation measures, they are disappearing with each reform: you can no longer retire at 50, now it is 52 and soon it will be 53; if you retire after 27 years of service (no longer 25!), there is such a big reduction of your pension that you are forced to carry on (up to 64 years of age very soon, otherwise, on top of a pension reduction you will also have a surcharge, like you have with car insurance); pension enhancement is now in question, as is the method of calculation.

And today, reading your letter, I am expected to still believe that tomorrow, with a points-based pension which nobody can say what it will be worth, or whether my pension will be the same throughout my retirement, I am supposed to not be worried about the current reform? (…)

An employee on strike to defend a pensions system that ISN’T points-based.”

Delevoye announces his resignation; Let him take his plan with him!

So, Delevoye is finally leaving. The man who had “forgotten” to declare his interest in a dozen or so bodies that are incompatible with holding a government post; the man who hadn’t noticed payments of thousands of euros into his bank account, but who dared to present a pension amounting to 1,000 euros as a big step forward…that man is finally going, in order – as he explained in a resignation letter – to “not hinder the government at a time when it is setting out the reform for which it has worked hard for two years”.

Rechristened the Macron-Philippe Plan, the machine for destroying our pensions is still a threat!

Tomorrow, 17 December, the mobilisation will undoubtedly move to a new level. The workers sense that it should not take much to swing the situation in their favour. The government also knows this, as it gambles on intimidation and raises the threat of end-of-year celebrations and holidays being sabotaged by strike action.

And yet, everything depends on it. Let it withdraw its plan while there is still time…

If it stubbornly refuses to withdraw its plan, it will be responsible for what follows. The workers who are voting in the mass meetings and strike committees in favour of preparing a general strike, in order to force the government to retreat, are pointing the way for the whole labour movement.

Yes, if the government digs in its heels, it will fall to the leaders of the organisations that represent the working class to take on their full responsibilities, and in their turn – “at the top” – to declare themselves in favour of preparing a general strike.

Delevoye is going. Everyone knows the most economical solution: let him take his plan with him.

“What’s needed is a total strike that shuts down the country, We are ready!”

As we go to press on December 13, workers across France are still out on strike to demand that the Macron-Philippe government withdraw a draft law that would begin to dismantle pensions for retirees. Everywhere — in the factories, workplaces and schools throughout France — workers and youth are holding general assemblies where they are voting, day after day, to extend what originally was just a one-day [December 5] nationwide strike. Everywhere, even in the smallest villages, workers and youth have taken to the streets to demand: “Withdraw the Pension Counter-Reform, Nothing Less!”

On December 12, the general assembly of strikers from a high school in the Paris region adopted a motion in common with the trade union sections in the school that concludes as follows:

“It has been one week since we joined the strike movement for the outright withdrawal of this pension ‘reform’ draft law. Millions of public- and private-sector workers have been on strike; hundreds of thousands have taken to the streets to press for this demand.

“With its announcement on December 11 [to go ahead with the pension counter-reform], the Macron-Philippe government has chosen to move ahead full throttle, remaining deaf to our demands. Our response is clear: If what’s needed is a total strike that shuts down the country to impose the withdrawal of the Macron-Philippe-Delevoye ‘reform’ project, we are ready!”

Isn’t this what the situation calls for?