Nov. 2, 2019 — Assembly lines are humming; cars and trucks are moving off the lots after the longest nationwide strike in half a century against General Motors ended, Oct. 24, when a slim majority of United Auto Workers (UAW) members ratified a four-year contract. For over a month, 48,000 autoworkers walked picket lines at 55 plants and parts depots in 19 states across the U.S., determined to beat back prior concessions, regain the union’s commitment to equal pay for equal work, and stop the hemorrhage of plant closings as GM, taking advantage of NAFTA, shifts production to Mexico.

As a result, the UAW could claim success on many bread and butter issues: the health plan will remain intact with workers contributing only 3% of the cost; wage increases met the union’s goal and profit-sharing bonuses will be tied to GM’s hefty North American profits. Temporary workers – 7% of the workforce – have a path to permanent positions; and, significantly, the in-progression time to reach max pay for those covered by the two-tier system – one-third of the GM workforce – will be halved from eight years to four. Max pay will top out at $32.32 an hour, the same as longtime employees.

Much to the anger of many UAW members, GM refused to budge on the primary issue of plant closures and retaining production in the U.S. GM held fast to a paltry $7.7 billion investment in U.S. factories. This won’t go far to preserve jobs, let alone create more of them. Almost one-half of the proposed investment will be used to retool the Detroit-Hamtramck Assembly for electric-pickup truck production. Two transmission plants, in Michigan and Maryland, as well as the Lordstown, Ohio, assembly plant will still be abandoned.

When it came time to vote on the agreement, the majority in 12 of 28 locals voted “No,” including Local 22 at Detroit-Hamtramck Assembly.

The UAW, historically, has been a union steeped in struggle and committed to organizing. It knows that workers cannot do well without wall-to-wall representation and industry-wide unionization. In 1979, the UAW had 1.5 million members. Today, that number is just under 400,000, with only the Detroit Big 3, GM, Ford and Fiat-Chrysler unionized. To survive, the UAW must push back against contracting out, as well as overcome its three major defeats at foreign-owned companies operating in the U.S. south. The UAW must thrust itself once again into organizing all autoworkers.

Everyone, let alone the UAW, understands clearly that U.S. workers cannot compete with the $1.90 an hour that GM paid workers in its Mexico plants in 2016. As a result, it should come as no surprise that during the twenty-five years since NAFTA, Mexico’s share of North America’s vehicle production expanded from 3% in 1994 to 20% in 2017. It is expected to hit 26% in 2020 (LMC Automotive).  The stakes are huge for U.S. workers. The time is long overdue for the UAW to break with the Democrats and mobilize its members to defeat the US-Mexico-Canada (USMCA) “free trade” agreement. 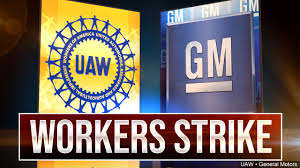