U.S. Hands Off Iran and Venezuela!

As we go to press the U.S. war drums are beating louder and louder.

As part of a mounting series of U.S. provocations against Iran, the U.S. State Department has ordered all “non-critical government employees” to leave Iraq on the grounds that, “U.S. intelligence has learned that Iran is planning strikes on U.S. forces in Iraq.” U.S. Central Command in the region reported in a statement on May 13 that, “U.S. troops are now at a high level of alert as we continue to monitor credible and possibly imminent threats to U.S. forces in Iraq.”

These statements come shortly after the U.S. government deployed four bombers and the USS Abraham Lincoln carrier-strike group, plus four B-52 bombers, to the Persian Gulf amid “indications that Iran was transporting short-range ballistic missiles to the region,” according to a State Department official.

Earlier, in April, the Trump administration — in yet another provocation — designated Iran’s Revolutionary Guard Corps a “foreign terrorist organization” and announced that it was tightening the U.S. sanctions on Iranian oil and gas.

This declaration was accompanied by an announcement by Secretary of State Mike Pompeo that the United States is readying to send 120,000 troops to the region to “counter Iran’s terrorist plans.” This is roughly the same number of U.S. troops that were initially sent to Iraq in the name of preventing the regime of Saddam Hussein from deploying his “weapons of mass destruction” against the United States and its allies — a total lie.

A Trump administration official told The New York Times (May 14) on condition of anonymity that National Security Advisor John Bolton, who supported the U.S. invasion of Iraq and had tried to push George W. Bush to take military action against Iran, “wants to goad Iran into taking action against American forces, thus justifying a military response.”

If this “goading” does not work, the Trump administration has other tricks up its sleeves. It can fabricate anti-U.S. incidents to justify a military strike against Iran. This is what occurred in August 1964 in the Gulf of Tonkin, when the Lyndon Johnson administration alleged that North Vietnam had attacked two U.S. naval destroyers. This incident — totally concocted, as it was later revealed — launched the United States’ full-scale involvement in a war that killed 50,000 U.S. troops and up to 2 million Vietnamese civilians. The Iraq war, based as well on a false premise, was no less deadly.

The U.S. war buildup with Iran also has the strong backing of Israeli Prime Minister Benjamin Netanyahu, who, at a recent NATO conference in Warsaw, called for greater collaboration among U.S. allies in waging a “war with Iran capable of toppling the Iranian dictatorship.” (New York Times, Feb. 13)

Bloomberg (May 13) reports that, “the American president sees Israel as a strategic asset in any coming war with Iran.”

Why is Iran such a target?

The issue is not — as the Trump administration claims — the undemocratic nature of the Iranian regime. The Saudi monarchy, one of the United States’ closest allies, is among the bloodiest and most brutal regimes on the planet. Just this past week, 30 political prisoners, including many youth, were beheaded for opposing the monarchy.

It’s not about alleged threats to the United States or the lack of democracy in Iran. The issue is affirming U.S. hegemony on every front. A French TV commentator put it this way: “In the arc that links Morocco to Pakistan, Iran is the only country that is not subordinate to the interests of the United States.” (Arte, May 13)

War Escalation the World Over

Wars are escalating the world over, and the common denominator is the war drive of the U.S. administration.

Israeli air strikes against the Palestinian people in Gaza on May 4-5, 2019

On May 4 and 5, violence broke out anew against the Palestinian people trapped in Gaza’s gigantic “open-air prison.” Two days of “intensive strikes” by Benjamin Netanyahu cost the lives of 23 Palestinians, including two very young children and a pregnant woman. Trump immediately declared that he “supported” Netanyahu 100%, while European leaders emphasized the State of Israel’s “right to security.” Israel is one of the main recipients of U.S. military aid. 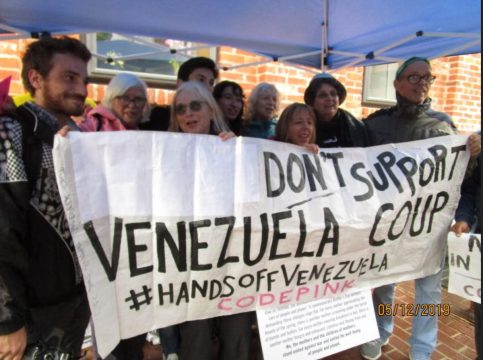 On May 5, Pompeo stated, concerning Venezuela, that the Trump administration would not consult Congress “should it be necessary” for the United States to launch a direct U.S. military intervention in that country. Pompeo made this statement a few days after Juan Guaidó — self-proclaimed “interim president,” with the support of Trump and the European Union — orchestrated a new (and failed) coup attempt against the legitimate government of Venezuela.

Pompeo’s statement also came at a time when Washington, DC, police stepped-up their attempts to evict antiwar activists who have occupied the Venezuelan embassy, with the support of the Maduro government, to protect it from being taken over by Guaidó and his U.S.-funded gang of usurpers. 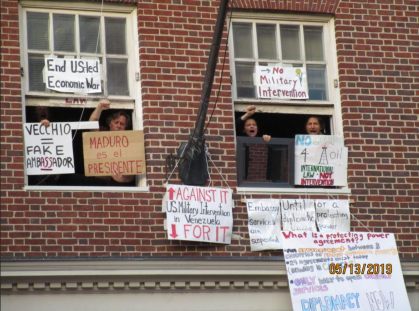 Antiwar activists protecting Venezuelan embassy in Washington, DC, three days before the police broke into the embassy and arrested them.

[LAST MINUTE: As we write these lines, we have just learned that the Washington, DC, police have forcibly broken into the Venezuelan embassy and arrested the four antiwar activists, thus violating Venezuela’s sovereignty as well as international and U.S. laws. An emergency demonstration in Washington has been called for Saturday, May 18. See the article on the Embassy Protection Collective in this issue.]

Also on May 13 Trump increased tariffs on $200 billion in Chinese goods from 10% to 25%, relaunching the trade war against China and causing the Asian and U.S. stock markets to fall.

A wing of the U.S. ruling class has issued dire warnings about the economic consequences of a coming war with Iran. Richard A. Clarke, national coordinator of security and counterterrorism for presidents George H.W. Bush, Bill Clinton and George W. Bush, stated bluntly that, “the effect on oil flow in the Gulf will cause the global economy to plummet” should Iranian special forces or surrogates strike Saudi and Emirati oil facilities, off-shore platforms, pipelines, ports and tankers.” (New York Daily News, May 6)

These are not isolated events. They follow the same pattern, illustrating the deep impasse of the capitalist regime based on the private ownership of the means of production — a regime in crisis that can only survive by fueling more and more wars. These include military interventions, trade wars, and “wars at home” against the workers in each and every country where the governments are in the service of imperialism.

Money for Jobs, Not War!

The bipartisan war against the working class and communities of the oppressed here at home has been brutal. In his 2020 budget, Trump is calling for $750 billion in Pentagon spending. The Democrats have countered with only a slightly lesser amount: $733 billion. Both amounts are record-high military budgets.

On April 14, the Washington Post reported that the Congressional Budget Office projected that the United States would spend more than $7 trillion on “defense” over the next decade, based on White House and House Democrats’ budget plans.

The Post went on to note that only a handful of Democrats in Congress “are even questioning how the U.S. government can afford to spend $7.5 trillion on the military.” House Speaker Nancy Pelosi has continually slammed single-payer healthcare for having “too high a price tag” while she remains silent on the skyrocketing war budget. 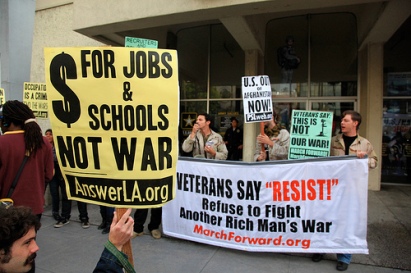 Gabriel Torres, a professor at Los Rios Community College in Sacramento, Calif., and a member of the California Federation of Teachers, explained in an interview with The Organizer why it is vital for the labor movement to take a firm and unyielding position against the U.S. wars and interventions abroad.

“It is not possible to fund human needs here at home, beginning with quality public education, if you don’t make drastic cuts to the war budget, which makes up about 60% of the yearly budget,” Torres stated. “But the Democrats, with only a few exceptions that can be counted on one hand, are not opposing the war buildup. They are one of the twin parties of war, funded by the military-industrial complex and beholden to Wall Street.”

Torres continued, “The fundamental problem is that our trade union movement is attached at the hip to the Democratic Party; you can’t even bring up this issue at our union meetings. That is why our main task as class-struggle militants is to fight for our unions to break with the Democrats and build their own workers’ party in alliance with the Black and Latino community organizations and activists.” [See full interview in the Unity & Independence supplement inside.]

Organizing the Fightback Against War and Exploitation

Building mass united-front actions against the U.S. wars abroad, with ever-growing participation by the labor movement, is the order of the day. Unfortunately, the antiwar movement is divided and, by and large, it remains trapped in what a veteran antiwar organizer calls a “left bubble” that does not reach out to the broad masses of people the way we did during the Vietnam War period.

Only an “Out Now!” stance that denies the U.S. government the right to intervene in the internal affairs of any nation on the globe — and that connects the wars abroad to the war on working people here at home — can succeed in bringing hundreds of thousands of people in the streets to stay the hand of U.S. imperialism.

At the same time, given the global reach of the U.S. war drive, it is necessary for the U.S. labor and antiwar movements to link up internationally with forces organizing the fightback against war and exploitation.

The only alternative to this policy of endless wars, driven by the survival of the capitalist regime, is the fight for the Workers International, which will free humanity from war, exploitation and barbarism.

This is the meaning of the initiatives promoted on all continents by the International Workers Committee Against War and Exploitation, For the Workers’ International — a committee that The Organizer newspaper supports fully.