Up with the fight for the Maghreb federation of sovereign and free nations, free from oppression and exploitation!

“The people and workers of Morocco have followed your revolutionary mobilisation with particular attention and enthusiasm. You have mobilised to build a democratic Algeria and a Constituent Assembly that will institute the sovereignty of our sister people of Algeria.

The fates of our sister peoples have been bound together for centuries upon centuries for historical and geographical reasons.

Yesterday, fighting colonialism was the force binding our two sister peoples together; the peoples of Algeria and of Morocco and also the people of Tunisia in their heroic combat to wrench national independence and the sovereignty of the Greater Maghreb, especially under the auspices of the North African Star, the organisation that regrouped migrant workers from the three countries to lead a courageous fight for national independence.

True, and in different ways, our Maghreb countries have failed to reach genuine independence. The independence did not result in genuine, sovereign national institutions, such as a Constituent Assembly that would have clearly broken with imperialist major powers. The plundering of our nations (oil resources, mineral wealth, agricultural and maritime resources among others) has been a ruling feature of the relationships linking our three countries with foreign capitalist powers; so the dictates of those powers and the murderous programmes of the IMF, the World Bank, the WTO and European Union … have in their turn unified our three peoples which have been plunged into destitution, poverty and hogra [1].

The policies of the successive governments in our countries since independence, and under different forms, have been in the service of foreign powers and opposed to their own peoples, opposed to national sovereignty.

Your fight to wrench total sovereignty for the Algerian nation is the fight of all the Maghreb peoples and workers. Workers in Morocco have proudly greeted your heroic combat for the Constituent Assembly, which will institute sovereignty and democracy, a step forward towards a Maghreb federation of peoples and nations free from the yoke of imperialism.

In continuity with the best traditions of the North African Star, which, from its very foundation in 1926 had raised the banner of the fight for the unity of the Maghreb peoples, free from imperialist oppression and exploitation, we eagerly salute the heroic combat of the Algerian people and workers. We also insist that the victory of your fight is the victory of the peoples and workers of Morocco and Maghreb for national sovereignty and democracy. Your fight, as well as the resistance of the Moroccan working people, paves the way towards the  genuine unity of free and sovereign Maghreb nations. This is what is evident in various forms, including in football stadiums where Moroccan supporters spontaneously express their support for their Algerian brothers and sisters, singing Moroccan songs, sung in their turn by Algerian youth in marches, an expression of spontaneous fraternity between our two brother peoples.

We salute your combat to reclaim the UGTA trade union federation and workers’ organisations, the instruments needed to achieve your noble social and democratic tasks.

In this framework, we eagerly salute the wave of worker strikes under way in Algeria from east to west and from north to south, in which Algerian workers voice their social demands, which is the genuine meaning of democracy, and in this way, they affirm the place of the working class as the driving force of the revolutionary process. We salute this wave of strikes, we who are engaged side by side with the short term contract teachers who are fighting for equal rights and the national status of public service workers, who are rejecting the regionalisation of education, we stand side by side with the youth and activists of the Rif region, whose leaders have been sentenced to long terms in jail for voicing their democratic right to demonstrate and for asking for solutions to their social and democratic demands. 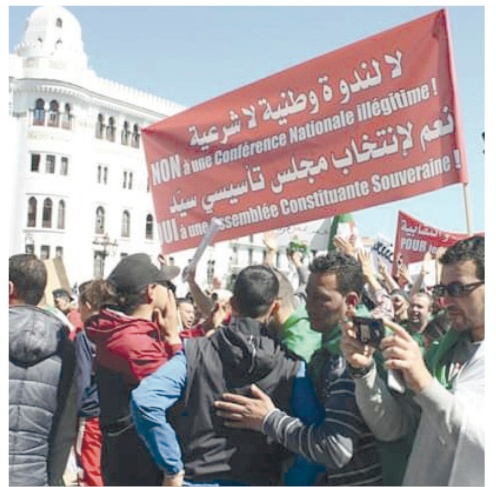 Banner reads: No to an Illegitimate National Conference, Yes to a Sovereign Constituent Assembly!

We especially salute the combat and engagement of our comrades of the COSI (Organising Committee of Internationalist Socialists) who, from the very start, engaged in the revolutionary uprising in Algeria on the orientation of combat for the Sovereign Constituent Assembly and for a free, democratic and socialist Algeria.

Dear brothers and sisters, rest assured that the workers, youth, women and men and working class activists of Morocco are standing by you for better or for worse. We are taking this opportunity to say to you loud and clear:

Down with any imperialist and foreign intervention against the Algerian nation!

For the fraternity of the peoples and workers of the Maghreb!

Up with the fight for the Maghreb federation of sovereign and free nations, free from oppression and exploitation!