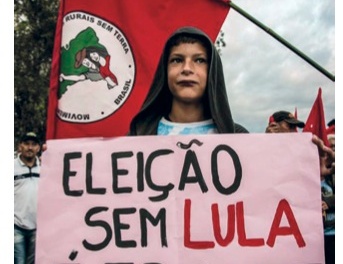 Activist with the Landless Peasants Movement (MST) holds sign stating that, "An Election Without Lula Is Fraud."

On September 11, 2018, Luis Inacio (Lula) da Silva and the National Executive Committee of the Workers Party (PT) decided to replace Lula’s candidacy for president with that of his vice-presidential running mate — Fernando Haddad, former PT mayor of Sao Paulo — in accordance with the heinous directive of the Superior Electoral Court (TSE).

What Trump, the financial markets, the coup government of Michel Temer, and the institutions that promoted the coup have done is that, “they have banned the Brazilian people from voting freely,” to quote from Lula’s September 11 Open Letter to the Brazilian People.

This ban has a political content, as Lula goes on to explain, accusingly: All the forces linked to the coup do not want to change the “grim reality of the country.” They do not want to take on the banksters, who are swimming in profits, or the Big Business tycoons, who, after having imposed the so-called “labor reform” law, are exploring every which way to deepen their exploitation of the working class and to further their looting of the public services through such measures as EC-95.

This latter measure — aka the Expenditure Ceiling Act — is a Constitutional amendment that would freeze all public spending for the next 20 years and turn over the titles to current public entities to the speculators.

There is no way to avoid insisting upon, and repeating, this simple truth: A presidential election without Lula is a fraudulent election.

The National Executive Committee of the PT, by a unanimous vote, and Lula himself have now affirmed their belief that with Haddad replacing Lula as the party’s presidential candidate, the PT will still be able to win the election, overcoming all the obstacles posed by the fraud. To be honest, we don’t see the logic behind this affirmation. What was the purpose of the coup organizers in banning Lula from running for office if not to prevent the PT from returning to the helm of government? How can one believe that they will let Haddad win?

Lula wrote: “You surely know by now that the courts have banned me from running for the Presidency of the Republic. Actually, they have banned the Brazilian people from voting freely to change the grim reality of our country.”

The coup organizers will do everything to prevent the PT’s victory. The most they will accept is our participation in this election to legitimize the fraud in the eyes of the people — a fraud, again, whose aim is to continue and deepen the attacks on our basic rights, the privatization of our public enterprises and services, the “reform” / destruction of our pensions and social security, and the heightening of the exploitation of the majority of the Brazilian people.

If there is anyone fueling the candidacy of ultra-rightwing presidential candidate Jair Bolsonaro it’s the people who organized the coup and are now preventing the Brazilian people from exercising their right to a free vote. The overwhelming majority of the Brazilian people want to vote for Lula. Everyone knows that with Lula in the race, Bolsonaro would not have the slightest chance of winning.

The organizers of the coup and the fraud — including the highest command of the military — will manipulate, scam, blackmail, threaten military intervention, and more, to prevent a victory by Haddad.

This will leave the political space for PDT presidential candidate Ciro Gomes — who promised he would place the pension funds on the financial markets in his own particular version of a “pension reform” — to contest Lula’s scattered votes.

As we have affirmed and reaffirmed in previous statements, for us, “An election without Lula is fraud.” The PT leadership should not have replaced Lula; it should have taken the demand for free and democratic elections to the streets.

Having said that, in light of the decision by Lula and the National Executive Committee of the PT to replace Lula with Haddad, what we are seeing now is that the majority of the PT militants and a large portion of the PT voters have embraced the fight for Haddad for President.

That is why we will go through the experience of the campaign to elect Haddad, calling to Vote 13 [the ballot line – tr. Note], alongside each PT candidate and each PT supporter, reserving our right to continue denouncing the fraud.

We join the Call to Vote 13 on the first round of the presidential election [on October 7], and on the second round [on October 28]. The vote for the PT is a useful vote.

Only a PT government, supported by the aspirations and mobilizations of the workers and all the oppressed, can stop and turn back all the measures of social regression imposed by the coup leaders at the behest of financial capital.

Only a PT government can stop the privatizations and take back the privatized companies; repeal the labor “reform” law; reclaim and advance our rights; repeal the law on secondary education and save the public schools; repeal EC-95 and prevent the collapse of public health services, education, and sanitation, etc.; prevent the destruction of pensions through the privatizing pension reforms; reclaim a 100% state-owned Petrobras [oil corporation] and take back sovereign control over the immense deep-water oil wealth; and conquer the democratic right to an Exclusive and Sovereign Constituent Assembly that codifies in its laws the aspirations of the majority of the people, starting with a political system without the holdover laws and institutions of the military dictatorship and without the financial manipulations of Big Business.

We will be in the same trenches alongside the other militants of the PT — with the workers, the youth, the landless peasants, all of whom chose to vote for Lula but were arbitrarily banned from doing so. We will join forces with this activist base so that at the end of this process we can discuss collectively the next steps in the struggle for democracy, workers’ and people’s rights, and sovereignty.

– Haddad, candidate of Lula and the PT, for President!

– Down with the fraud of the coup organizers!