(3) One Year Already, One Year Too Many Editorial, Workers Tribune No. 134

(for signature-gathering at workplaces and street corners)

Macron Is a Warmonger!

Stop the Bombing in Syria Now!

The POID — alongside 26,000 workers, youth and activists of all walks of the labor and democratic movements — is calling everyone to participate in the national demonstration on Sunday, May 13 in Paris: “One Year of Macron, Enough Is Enough!

(*) The pretext for the bombing is the use of chemical weapons in Syria. But this is pure hypocrisy given that the U.S.-led military coalition, in which the Macron government participates, is also using it: “The use by the U.S.-led coalition of white phosphorus in the suburbs of Raqqa, Syria, is illegal and could constitute a war crime.” (16 June 2017, Amnesty International) 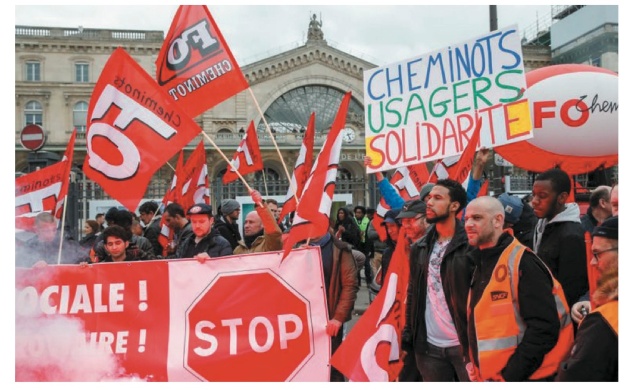 As far as any railworker or rail user can remember, the country has not seen such a massive SMCF strike as the one that took place on 2 April 2018.

Whatever comes after it, this historic movement sweeps away several supposed “obvious facts” that have been pushed for months:

– The class struggle is over? The mass of railworkers – blue collar, white collar and managerial staff – bound together and enjoying the support of all workers, are determinedly standing up to a handful of people in power, the zealous servants of the demands for privatisation/destruction of the European Union, the bankers and the speculators.

– The workers do not want to fight back? The opposite is true: a mass strike, united, solid.

– Recognised job grades are supposedly obsolete and opening up to competition irreversible? The opposite is true: the strike action for the withdrawal of the Macron-Spinetta Report carries within it the demand for a return to full recognition of job-grades, to a fully public service and to a state monopoly.

And this strike highlights the reality of the consultation process: the Macron-Philippe government’s main tool which it is using in every domain as a means of chaining the trade union organisations to “co-constructing” its counter-reforms.

After thirty consultation sessions, Transport Minister Borne dared to declare to SNCF on the eve of the strike: “I deplore the fact that strike action is being launched when we are only halfway through the consultation process.”

The government is affirming that it will not give way: this is why it would like the consultation process to continue even while strike action is going on.

The striking railworkers have one goal: withdrawal of the Macron-Spinetta Plan.

The trial of strength has begun.

No doubt carried away by the mobilisation, CGT railworker federation Secretary Laurent Brun has just declared himself “in favour of withdrawal of the government plan” and is calling instead for the “complete cancelation of opening up to competition”.

So, the CGT, FO and SUD railworker federations are clearly demanding the withdrawal of the Macron-Spinetta Plan!

Unity for the withdrawal of the Macron-Spinetta Plan is the path to victory for the railworkers!

Today, every sector of the working class – especially the striking refuse collectors, the Carrefour workers, civil servants, teachers, hospital workers, and others – is watching what is happening with SNCF. Worker solidarity is being shown with the railworkers. The workers and youth understand that forcing the government to back down on one link in the chain means creating the conditions for forcing it to back down on all the others.

In the trial of strength that is underway, it falls to the labour movement to line up as a bloc alongside the railworkers: in other words, to break with a consultation policy which only serves the government’s interests.

Long live the railworkers’ strike! The government must back down: withdraw the Macron-Spinetta Plan

Macron: One Year Already, One Year Too Many

One year ago, on 23 April 2017, the first round of the presidential election put Marine Le Pen and Emmanuel Macron in the lead.

That same evening, the National Bureau of the Democratic Independent Workers Party (POID) took a position from a class viewpoint: “The workers cannot place their confidence in Marine Le Pen, whose programme is above all based on opposing “the French” to “the immigrants”, with the aim of diverting the workers’ legitimate anger away from the capitalists and bankers who are responsible for unemployment and poverty, away from the governments and institutions that are organising unemployment and poverty, and towards their working-class brothers and sisters.”

Was it necessary to turn to Macron, as did the representatives of the defeated big candidates of “the left” at the time, for whom Macron constituted a “bulwark” of democracy? The National Bureau of the POID refused to do so: “In case we need reminding: Macron was one of the shapers of the El Khomri labour law, and he has pledged that once elected he will strengthen that law and follow through to the end with putting the existence of trade unions into question, and will force the unemployed to accept any job even if this means losing 25 per cent of their starting wage. Macron is Hollande, but worse. He is Sarkozy but worse, he is El Khomri but worse. Who can believe that a candidate whose programme is the destruction of labour rights, superexploitation and worsening poverty, could be a bulwark of democracy?”

Almost a year has passed since then. Readers, we will let you be the judge. Was the POID exaggerating when it said that far from saving democracy, Macron – like Hollande, Sarkozy and El Khomri, but worse – would be its gravedigger?

At a time when the railworkers are determinedly taking strike action against a government that is transforming SNCF into a limited company while pretending that it is not privatising it; at a time when secularists and democrats are angrily hearing Macron propose to the bishops to “restore (…) the link between Church and State which has been damaged”; at a time when students are suffering police repression that is spreading from faculty to faculty; at a time when in every domain, the austerity dictated by Brussels is affecting public services and threatening the most basic labour rights; at a time when the government, full of contempt and arrogance towards the trade unions, is demanding that they submit to a consultation process that is nothing more than the old recipe of associating labour with capital (see page 8); at a time when Macron, working hand-in-hand with Trump, is preparing a new military intervention in Syria; can one say anything less than “Macron Out!”?

For anyone who adopts a class viewpoint, the viewpoint of the workers and the youth, there can be no hesitation whatsoever: before there is nothing left of everything that labour and democratic struggles have built over the course of more than two centuries, Macron out, now, right away! Out, without waiting for [the presidential election in] 2022.

This is the cry that will ring out in the streets of Paris on 13 May.