West Virginia teachers are showing what real union power can do, even in a right-to-work (for less) state.

As we go to press (March 1), teachers in all 55 counties of West Virginia are still on strike. They took strike votes on February 28 and vowed to continue the strike indefinitely until their demands are met. It is the first statewide teachers’ strike in five decades.

The teachers are asking for a wage increase (they are among the lowest-paid teachers in the country), but most important, they are asking the governor and state legislature to “fix” the teachers’ broken PEIA health-insurance program. The governor promised to place a temporary freeze on health insurance premiums, deductibles, co-pays and prescription costs, but the teachers have insisted that a “freeze” — even when combined with a pledge by state officials to “set up a commission to resolve the long-term problem of PEIA” — is not good enough.

Hundreds of teachers rallied on the Capitol in Charleston, chanting “A Freeze Is Not a Fix.” They say that whatever pay increase they get — the governor has upped his initial 2 percent proposed increase over three years to 5 percent  — will disappear almost immediately with the increased health-care costs. They are demanding an immediate solution — a fracking tax — to fix the problem.

The teachers walked off the job on February 22 in what has been an illegal wildcat strike, as strike action for public employees is banned in West Virginia. It was supposed to last only two days. But enthusiasm on the picket lines was so high, and public support so strong, that the teachers voted to extend their strike into the second week — and now they have voted to extend it indefinitely till their demands are won.

West Virginia Attorney General Patrick Morrisey has threatened to seek an injunction against the teachers if the strike continues. But the teachers are unfazed by the threats; their confidence and strength have grown by the day.

Now it is up to the rest of the labor movement to step up to the plate.

Teachers’ unions — together with the AFL-CIO and SEIU — need to deliver their full and uncompromising support (including financial support) to the striking West Virginia teachers. A victory in West Virginia — which is a very real possibility given the resolve of the teachers on the ground and the widespread community support for the strike — could mark a turning point in the class struggle nationwide.

“An Injury to One Is an Injury to All!” must become the battle cry of the teachers’ unions and of the entire labor movement. — Edit. Bd.

The Chicago Teachers Union stands in solidarity with educators in West Virginia who are on strike for fair wages and adequate health care. Enough is enough. Even without collective bargaining, these teachers are steadfast in the face of attacks on their classrooms and the students they serve.

We stand with our sisters and brothers in West Virginia who are being forced by Gov. Jim Justice to pay for that state’s budget shortfalls. They have not caused this crisis, yet they are expected to shoulder the burden, and that is unacceptable.

Solidarity is the foundation of unionism, and the struggles of our sisters and brothers belong to all of us. We urge our family in West Virginia to stand strong, for they have thousands of CTU members standing behind them.

Labor Movement Needs to Walk the Walk, Not Just Talk the Talk! 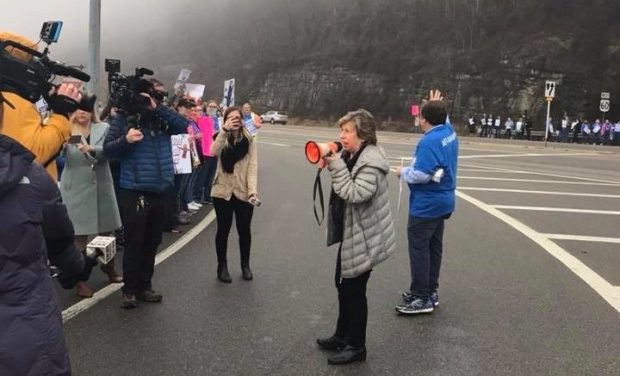 Speaking to hundreds of striking teachers in West Virginia on February 26, the very day that the Supreme Court was hearing the Janus v. AFSCME case, Randi Weingarten, president of the 1.5-million-member American Federation of Teachers (AFT), stressed the point that working people need to rely on themselves, and not “outsource their power to others,” if they are to win their demands.

Weingarten’s West Virginia picket-line message echoed the resolution that she co-authored with AFSCME President Lee Saunders and submitted to the October 2017 national convention of the AFL-CIO in St. Louis, where it was adopted unanimously. The resolution, titled, “An Independent Political Voice,” reads, in part:

“Acting on behalf of corporations and the rich and powerful, the political system has been taking away, one after another, the pillars that support working people’s right to good jobs and secure benefits. … Against this, we have one choice. We must give working people greater political power by speaking with an unquestionably independent political voice, backed by a unified labor movement. The time has passed when we can passively settle for the lesser of two evils.”

These words ring true: For far too long, unions have “outsourced” their power to politicians who claim to be friends of labor but who, as workers soon learn, have much better friends in the corporate boardrooms. “We have to do it ourselves” can only mean relying on the independent power of labor and its community allies — not on the politicians in the Democratic Party, who are funded by the very same corporations that fund the Republicans.

But words are not enough; the labor movement needs to walk the walk, not just talk the talk. So what will it take for this AFL-CIO resolution to become a call to unleash labor’s potential power in response to the unprecedented assault by the bosses and the politicians in their pay?

From Words to Action

First thing, the teachers’ unions and the entire labor movement need to mobilize support for the striking West Virginia teachers. They are today on the front lines of the struggle for workers’ rights. This is urgent. The striking teachers need to know ASAP that labor has their back.

But that is not all. Labor is under attack like never before. The Supreme Court’s Janus v. AFSCME case, which would eliminate agency fee, represents a gun pointed at the temple of the labor movement. The bosses want to gut labor’s numbers and their collective strength. A federal “right-to-work” law looms closely behind Janus. Actions to protest the Supreme Court’s expected decision in support of Janus were held across the country on February 26. But they were small, scattered — and they were not backed by a unified labor movement. This is not going to turn the Supreme Court around.

The AFT is one of the unions calling on all its affiliates to reconnect with their members and promote “bargaining for the common good” — which means putting forward demands that benefit the entire working class, and not just the educators: fight for $15 and a union, massive job-creation plan, tax the rich, no more deportations, affordable housing for all, single-payer healthcare, etc.

Randi Weingarten was right on the mark when she told the West Virginia striking teachers that we “must not just fight the Janus case in court, we must go much deeper into our union and engage the members through multiple pathways, much like we did back when our union started.”

Stop Janus in its Tracks!

Yes, the trade unions will need to reach back to their independent, fightback origins if they are to prevail in this fight against the corporate juggernaut. But it is not enough to prepare the unions for the post-Janus era, important though that may be. The time is now to stop Janus in its tracks. And it is not too late to do so.

The leadership of the International Longshore and Warehouse Union (ILWU) has voted to shut down all 29 West Coast ports on Tuesday, May 1st, to demand labor rights, and it is calling on the entire labor movement to follow suit. Isn’t it time for labor and its community partners to pull out all stops and mobilize their members in a National Solidarity Day For Labor Rights and Immigrant Rights on May 1st?

The immigrant rights movement, with its massive mobilization of more than 6 million people on May 1, 2006, reclaimed May Day for immigrant workers. Now is the time for the labor movement to reclaim May Day for all working people and the oppressed. The labor movement needs to flex its muscle. It needs to speak — and act — with an “unquestionably independent political voice.”

– All Out to Support the Striking Teachers in West Virginia!

– For a National Day of Solidarity on May 1st for Labor and Immigrant Rights!