(Statement by the Democratic Independent Workers Party of France / POID on October 27, 2017)

Today, 27 October, the Parliament of Catalonia decreed through a resolution that “Catalonia constitutes an independent state in the form of a Republic”, and decided to begin “a constituent process”.

This declaration is in accordance with the result of the referendum on 1 October.

It is in accordance with the democratic demand that it is for the Catalan people to decide its own future, and for it alone!

Since this declaration was made public, there has been a real outburst directed against the Catalan Republic:

It is clear that the proclamation of the Republic of Catalonia opens up a breach in the institutional system of the Francoist monarchy put in place 40 years ago in continuity of the Franco dictatorship.

All of the peoples of the Spanish State, from the Basque Country to Galicia and from Andalusia to Castile, can step into this breach and in turn proclaim their own Republics, and begin everywhere the constituent process that will allow the peoples themselves to decide what should be the social content and form of a genuine free union of the free Republics of Spain.

It is for the peoples to decide.

The Democratic Independent Workers Party (POID), which is fighting in France against the regime of the Fifth Republic and against the European Union, for unity in order to drive out the Macron-Philippe government, and for the free union of the free peoples and nations of the whole of Europe, reaffirms its solidarity with the people and workers of Catalonia, and with the people and workers of every region of Spain in struggle for democracy and against the monarchy.

Hands off the Catalan people! 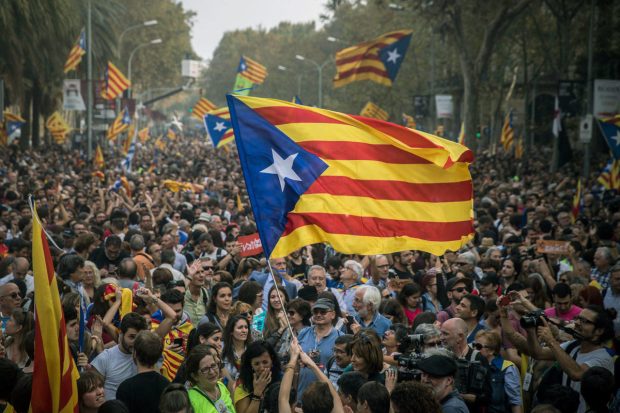 Who Fears the Republic, Who Does Not Fear it, and Why?

Catalans, of course, but the banks above all: by transferring their head offices out of Catalonia, CaixaBank and Banco Sabadell (the two main Catalan banks) have expressed a class-based concern.

The sudden emergence onto the public stage over the last month of hundreds of thousands of workers from the cities and the countryside, of young people and pensioners, their organising themselves into defence committees… all this risks giving the nascent Catalan Republic a social content that threatens the stability to which every banker aspires, whatever his or her nationality.

Who fears the Republic? The European Union, and all of the governments – with Macron in the forefront – lined up behind Rajoy and King Felipe VI. Also, the leaders of the Spanish Socialist Party who are oblivious to their history, going so far as to work with Rajoy on invoking to Article 155!

Who fears the Republic? The leaders of the “parties of the left” and the trade union organisations, who have called for a negotiation process that respects the Francoist monarchy and who are refusing to recognise the 1 October referendum through which the Catalan people declared: “We are and we will be a free Republic.”

In contrast with the bankers, the workers, youth and people of Catalonia do not fear the Republic. They are demanding that it be proclaimed, and every day they are more defiant towards the leaders of the Generalitat [Catalan government], who seem to want to take the path of abandoning it. Through their independent organising into defence committees, they seek to open up the path to the Republic themselves.

This mobilisation has come up against powerful obstacles: in particular, those raised by the refusal of the leaders of the organisations claiming to stand for the working class and democracy to break with the monarchy.

But this far-reaching movement, which is revolutionary in many aspects, carries all sorts of possibilities, despite the obstacles. Including this one: the establishing of a Republic based on a Constituent Assembly that will define its social and political content, breaking with any subordination to the bankers and the European Union.

The workers of the other regions of Spain have no reason whatsoever to fear the Catalan Republic. On the contrary: its proclamation will open up a first breach, marking the end of the monarchy and the time for the Basque Republic, the Andalusian Republic, the Galician Republic… and for the free union of the free Republics of Spain.

From one end of the continent to the other, the workers have every reason to support the movement by the popular masses as they head towards proclaiming the Republic in Catalonia, whatever the cost.

The fatal blow delivered to the Francoist monarchy will ring out as a call to put an end to the institutions of oppression and exploitation everywhere. Beginning with the European Union. And in France: the Fifth Republic.

Long live the Republic, and tomorrow the free union of free Republics of Europe, free from the yoke of the European Union, the bankers and capitalists across the continent!